Where am I? Home > News > Ways with weeds in vineyards

Ways with weeds in vineyards 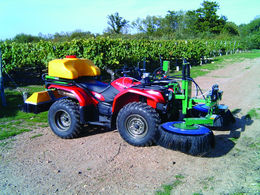 Grapes as dessert fruit or for fermenting wine are grown throughout Europe in a broad range of climate, weather, topography and soils. The grapevine thrives in diverse situations including rich cool slopes of the Rhine Valley in Germany, the dry soil of Sicily and the mild maritime climate of southern England and most of Eastern Europe.

Grapevines are susceptible to a wide range of arthropod pests and fungal diseases. The exact pest profile and yield threat will depend on prevailing environmental conditions in the country or region, but weeds present the most uniformly common threat to yield because wherever grapevines grow weeds are not far behind and usually in front.

Weed damage and control
There are many facets to weed cover and damage caused in vineyards and grapevines, and likewise by the application methods and herbicides used to manage them. Weeds damage grapevines and negatively impact on yield and quality by:

Weed control considerations that must be taken into account include:

Controlled Droplet Application (CDA) techniques using rotary atomisers to generate and apply herbicides in uniformly-sized droplets go a long way to satisfy requirements for efficient and drift-minimising application techniques. CDA technology ensures that the droplets are accurately targeted onto weed plant targets with minimum spray drift. Spray volume and amount of spray mixture carried is reduced as is the weight of sprayer and size of vehicle required to support and move it. When the rotary atomisers are shielded by fitting domes, spray drift is all but eliminated, with contact and coverage ensured even when using minimal spray volume and doses.

Micron Group is the leading designer and manufacturer of CDA sprayers that offer vineyard growers all the above mentioned benefits. Its Enviromist range of CDA sprayers was first used to control weeds in the vineyards of South Australia and has since been adopted by vineyards across Europe and in the Americas.

Traditional hydraulic sprayers are hampered by having to haul large volumes of spray mixture up and down the rows between closely spaced vines. Enviromist CDA sprayers overcome these problems by offering a range of benefits including:

Undavina offers a highly effective way of controlling weeds growing around the base of vines. Available in a range of sizes, it features freely rotating shielded heads which ensure precision application and eliminate drift. Furthermore, the shield efficiently contains the spray under the hood thus safeguarding the valuable vines from spray contact. Undavina can handle more rugged terrain and can even be used over small rocks and irrigation sprinklers. Plants are further protected by the innovative Enviromist breakaway system which gently deflects and rolls around plants reducing mechanical damage and allowing to spray right up to the vine.

The Spraymiser units are designed for centre-row weed control, and are light enough for mounting on an ATV as well as a tractor. The range incorporates vertical plane CDA technology and a re-circulating system to deliver low application rates and increased chemical efficiency. Spraymiser’s shielded design eliminates spray drift which means the machines can be used even in windy conditions.

The Spraydome range has been specifically created for treating weeds around tender stems in young plantings. The CDA atomisers are fully covered by a dome-shaped plastic shield which fully eliminates the risk of spray drifting onto the plants and the surrounding environment. Spraydome is also fitted with the proven breakaway system to provide a gentle, rolling effect round the young vines.

Testing time for different systems
Weed control techniques used in vineyards are under the spotlight for cost effectiveness and need to comply with tightening environmental and safety legislation. Only way to distinguish between the wide variety of herbicide application options, and non-chemical methods, is through field trials under commercial conditions. Italian scientists at Turin University have recently conducted such trials.

Work was carried out by the Mechanics Section in the Department of Agricultural, Forestry and Environmental Economics and Engineering at the University of Turin, to compare innovative application technologies for under-vine weed control. Trials took place at ‘Terruta Cannona’, a wine-grape experimental station in Carpeneto AL (Piedmont Region, Northern Italy), inside a Cortese grape variety vineyard of 1 hectare using ‘Guyot’ growing system with vines in a 2.8 m (between rows) planting arrangement. Herbicide used was glyphosate applied twice per year, once at the beginning of May and again in mid October. Weed cover was assessed before and after treatments (30 days). Most frequently found weed species were the broad-leaved Stellaria media, Veronica arvensis, Veronica persica, Setaria viridis, Convolvulus arvensis and Chenpodium album and the grasses Lolium multiflorum, Alopecurus myosuroides and Bromus mollis.

Six application techniques were compared with each other and the zero treatment control.

Results were compared and conclusions drawn on a wide range of commercial considerations, including spray volume and chemical dosage used and cost effectiveness.

The report states that the cost benefit of the Enviromist CDA sprayer with reduced spray volume and minimal chemical dosage (giving an exceptionally high weed control efficiency index), were particularly attractive where several applications are traditionally required during the season, especially in larger vineyards.

Savings of over 30% in the amount of a systemically acting herbicide (glyphosate and aminotriazole) through Enviromist CDA equipment was demonstrated compared with recommended dose rates with high volumes techniques. Lower but still substantial reductions were achieved with a contact herbicide (glufosinate-ammonium) using Enviromist CDA equipment.

Additional benefits and savings were also obtained, although these are less quantifiable in terms of cost. Most notable were the massive reductions in water usage and better application timing with execution of application not being dependent on prevailing wind direction and speed and, additionally, benefit to vines and soil through using light-weight and less intrusive herbicide application equipment.