Where am I? Home > News > The science behind weed control

The science behind weed control 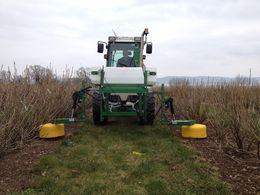 Formed in April 2011, the James Hutton Institute is a leading, multi-site scientific organisation encompassing a distinctive range of integrated strengths in land, crop, waters, environmental and socio-economic science. It strives to tackle today’s major global issues such as preserving our natural resources, developing next generation crops and delivering sustainable production systems. Based in Dundee and Aberdeen, the Institute has four main farms where most of the laboratory research is put into practice, including pioneering work on a whole range of soft and top fruit.

Hartwood Farm is a 350ha livestock farm in Lanarkshire which undertakes research on soil, land and the environment, with most of the area used for grassland to keep 180 suckler cows and their calves and 460 ewes and lambs.

Glensaugh farm near Fettercairn has just over 1000 hectares and is probably best described as a high lying marginal farm on an upland estate . There is some woodland, around 30 hectares of arable land and over 900 hectares of moorland hinterland supporting 800 ewes, 100 red deer and 50 cows.

With almost 400 separate trials on the go, half of the land area is dedicated to field experiments supporting the study of crops, plants and their interaction with land, soil and the environment. “The plant breeding programmes which we are well renowned for are raspberries, blackcurrants and potatoes, but we also work extensively on blueberries, strawberries, apples, pears and plums amongst other crops,” explains Euan. “The remaining half of the land area is used to grow commercial crops and enables us to return any field that has been used for field trials back to a “blank canvas”. It takes around two years (or more in case of perennial crops) of commercial cropping to remove the footprint of a previous trial before it can be used for experimental purposes again.”

All of the fruit trials and some environmental projects are undertaken at the Mylnefield site at Invergowrie on Dundee’s western fringes, whereas Balruddery Farm is where most of the other crop breeding programmes take place. Balruddery Farm also hosts a long term experimental platform, the 40 hectare Centre for Sustainable Cropping, for research on the sustainability of arable ecosystems.

Euan’s role is to manage the two farms and to co-ordinate the onsite field trials and experiments to enable the scientists to put their “science into practice”. “We are a LEAF farm (Linking Environment And Farming) and are proud to have been the first LEAF innovation centre in the UK. Like most farms part of our work involves undertaking a range of varied spraying activities on diverse crops which include soft and top fruit, potatoes, cereals, beans and oilseed rape. Part of our LEAF strategy to minimise our chemical input is to spray only when we need to and to target only the specific areas where we need control (eg. at the base of the fruit rows). Growing grass pathways between the rows and maintaining these with a grass mower and using a micron sprayer to target the base of the plant is one of our solutions.

“To control weeds in raspberries and blackcurrants, we use a Micron 100l Spray System equipped with either 2 Spraydome 400s or 2 Undavina 600s depending on what is required, mounted on the front linkage of a Fendt 209V vineyard tractor; this frees up the rear of the tractor to enable a further grass cutting operation in the same pass. ”Undavina and Spraydome’s spray atomisers are fully shielded under a circular freely rotating head to virtually eliminate drift. They also incorporate a spring loaded arm which gently deflects around the base of the bushes, allowing spraying right up to the base.

“We first used this equipment in the summer of 2012 after it was recommended to us by AM Phillips, who have supplied the majority of our spraying equipment for around 20 years,” Euan explains. “With a number of trials underway, the sprayers get used regularly as we pass through each plantation roughly once a month during the summer. We have used Glyphosate at 4l/ha in 80l/ha water, Glufosinate-ammonium and Diquat products at the same rates at various stages through the season, all with excellent results.

“Because of its shielded construction, the Spray System allows us to control the placement of the chemical and reduce drift which are very important in ensuring there is no damage to experimental plots that are assessed for growth characteristics.”

“Before we purchased the Micron equipment, we used Dichlobenil granules to control weeds in the spring. Our need for accuracy is great so this was often followed up later in the season by teams of workers hoeing and strimming weeds during the summer and we were able to hand lance weeds with Diquat if circumstances allowed. Using Micron CDA sprayers saves many man hours per plot compared to hoeing, the ratio being at least one spraying hour to 10 hoeing hours.”

Euan estimates that the equipment will pay for itself within around two years in reduced labour costs alone. As well as his raspberries and blackcurrants, he plans to use the sprayers on top fruit in the future.