Where am I? Home > News > Micron Wins at Scarecrow Festival 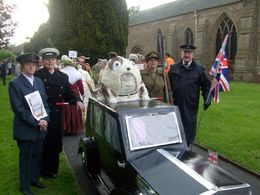 Micron’s workforce are delighted that their entry, “Sir Winston Churchill” took First Prize at Bromyard’s Scarecrow Festival this weekend . The scarecrow, designed and built by Janet, Gina, Wendy and Rob, was one of over 40 entries that began the Festival on Friday night with a parade from St. Peter’s Church to the town square and then on through Bromyard’s crowded High Street to the town green.

The theme for this year’s competition was “Historical Characters”, and Sir. Winston was accompanied on his journey around the town by Abraham Lincoln, King Henry VIII and Cleopatra, to name but a few. Local dignitaries commended Micron on their entry.
Micron Sprayers Limited are using their prize money to donate a shield that can be presented annually to the winners of the "Best Scarecrow" category.