Where am I? Home > News > Micron Varidome goes round the world

Micron Varidome goes round the world 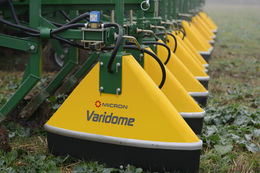 Following the introduction of the Varidome S3 – the three section band sprayer – at Lamma 2012 just over a year ago, Micron Group have seen growing interest in its precision inter-row technology. The sprayer received excellent feedback at both Lamma and Cereals from UK and overseas visitors alike. Encouraged by the successful UK launch, Micron presented the Varidome to the French market at Innov-Agri, the country’s main agricultural event in September 2012 and are planning further exposure at Tulare (USA) in February 2013, Yorke Peninsula Field Days (Australia) in September 2013 and further introductions in mainland Europe and Scandinavia. Driven by customer demand, Varidome’s manufacturer Micron has also developed the Varidome S5 – its largest to-date, nine metre band sprayer – which was exhibited at the 2013 Lamma event.

The reasons for the broad appeal of the Varidome are many. Firstly, the industry has seen an increasing withdrawal of active ingredients for crop protection which means farmers are faced with a limited choice of herbicides. Thanks to Varidome’s highly flexible design, the sprayer can be configured to suit most row-grown crops including sugar beet, oil seed rape and vegetables, making it a viable and attractive choice for a wide range of applications.

Secondly, the Varidome features a shielded spray system which allows users to better target weeds growing in the inter-row and a wider choice of herbicides for the job. The benefits of this are twofold: not only can Varidome effectively remove persistent weeds such as blackgrass under the shield, it can do so in a cost-effective way as non-selective herbicides such as Glyphosate can be applied. Used in conjunction with precision guidance systems, Varidome inter-row sprayers can deliver impressive 2 to 3 cms accuracy.

Varidome’s optional Dual Spray System offers further cost-savings and increased productivity. As well as treating the weeds growing inter-row under the shield, the sprayer can be fitted with a second spray line which can deliver selective herbicides, foliar feeds, fungicides or insecticides directly over the row. As a result, the product is only applied where it is needed, making Varidome a better choice all round.