Where am I? Home > CDA Technology > Applications > CDA For Weed Control In Fruit, Grapevines And Hops

CDA For Weed Control In Fruit, Grapevines And Hops 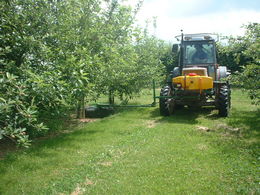 United Kingdom growers produce a wide range of fruit crops, including top fruit, soft fruit and vines, but the mild wet climate ensures that weed growth is not far behind.

Micron Sprayers Limited, leading designer and manufacturer of portable and vehicle mounted CDA (controlled droplet application) spray application equipment have introduced a new concept in CDA weed control. The ‘Enviromist’, which was developed in the fruit and vine growing heart lands of South Australia, is widely used throughout the Australia and New Zealand for weed control in table and wine grapes, orchards, bush fruit crops and hops. More recently the Enviromist has been taken up with enthusiasm in North America, and particularly California, where it is used for inter-row weed control in a very wide range of fruit crops including blueberries.

Wherever fruit crops are grown traditional methods of applying herbicides for weed control are hampered by the same economic and logistical constraints of having to haul large volumes of spray mixture up and down the rows. For most fruit crop situations, including vineyards, there are additional problems related to the potential for mechanical and chemical damage to sensitive and valuable trees, bushes and vines when using traditional spray application equipment.

Such problems are a thing of the past with the novel and highly innovative system called ‘Enviromist CDA Covered Spraying’.  Benefits of the system are:
· Controlled Droplet Application is achieved through production of optimal-diameter spray droplets (produced using Micron Spray Heads) within a narrow size distribution
· Weed control is achieved at significantly reduced volumes (as low as 12 litres/ha) compared with traditional high volume hydraulic sprayers
· Use of this ‘covered’ (shrouded) CDA spraying system, provided by the ‘dome’, minimises loss of spray droplets to the atmosphere.

The Spraydome 2000 is designed for centre-row weed control, and is light enough to be mounted on an ATV or motorcycle as well as a tractor. The Spraydome 1000, which is custom-designed for a gentle, rolling effect around tender stems in young plantings, is easily converted to the Undavina format for use in mature vines. The Undavina is uniquely designed to handle more rugged terrain, because the ‘skirt’ around the ‘dome’ allows for covered spraying almost anywhere, even over small rocks and sprinklers.

The advantages offered by ‘covered’ CDA spraying using these light-weight sprayers with low soil compaction are significant and many. Growers can get out and spray in wet conditions when traditional methods would be constrained, a situation that is occurring more frequently in the increasingly unpredictable British climate

The combination of much lower spray application volumes (as little as 12 litres/ha compared with 250 litres/ha typically used for high volume applications) and the 60 litre tank offers less down time and quicker turn-around times. The combination of controlled droplet application (which also implies controlled dosage application), together with low soil compaction, avoids the checks on growth frequently caused by heavier and less accurate sprayers. Growth checks may be caused by physical damage to roots and chemical damage to both roots and aerial plant parts.

Comments from growers in the grape-growing areas of the world where this system is already being used reflect these advantages. One wine grape grower from South Australia claims to have cut his weed control costs by 79% and obtained a five fold increase in his ability to control couch grass (Agropyron repens). Another in the neighbouring State of Victoria now spends one week on a four wheel bike towing an ‘Enviromist’ instead of four weeks on a tractor ploughing up weeds.  Growers in the wetter parts of California say that this ATV towed system allows them to get onto the field and spray more promptly after rainfall than they would if using a tractor.

CDA sprayers in the ‘Enviromist ’ range can offer real benefits for a variety of holdings in the United Kingdom including growers of top fruit, soft fruit, grapevines and hops.